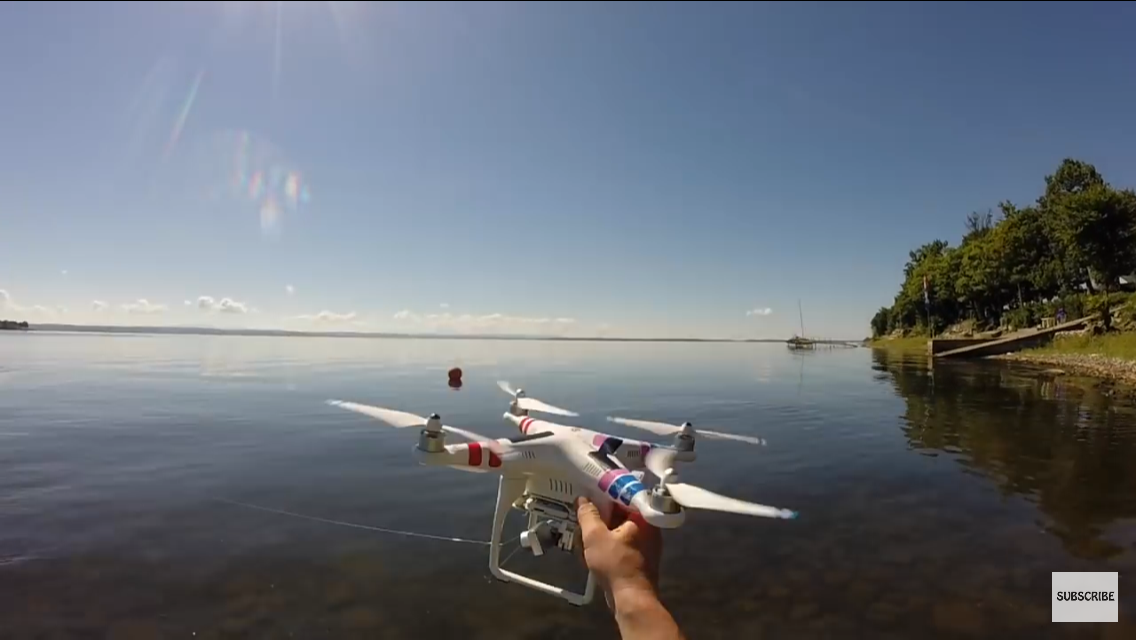 You can do a lot of amazing things with drones, but have you ever wondered what it’d be like to go fishing with one? Well, David Freiheit decided to actually try it! Watch the video below to see how it went.

The adventure begins on a calm, clear day on Lake Champlain (see details below) by launching a jitterbug into the water by hand. David then takes off with his DJI Phantom 2 Vision+ (see specs below). He pulls the lure in one direction for a while, then changes direction. That’s when something interesting happens.

Then he switches to the drone’s camera and we see that point of view. You can see the fish, a nice bass, jump out of the water right after it gets snagged. The drone struggles a bit as it acts like a tug boat, pulling the fish towards shore.

Oh my gosh, that is a huge fish.

David then pulls the line in by hand. After all, there is no fishing pole or reel! You can tell he is super excited and out of breath!

Holy cows! Holy cows! I did not think this was gonna work.

After pulling it in, he screams for his wife, Marion, to come help, as he laughs hysterically! He starts running to the house, carrying the bass and still yelling for his wife. It’s pretty funny to watch.

COME HERE! LOOK AT WHAT I CAUGHT WITH THE DRONE!

His wife walks up, while holding their baby.

He asks her to make sure the GoPro is rolling, then continues to tell his family about his amazing experience. They don’t seem quite as excited as he is! He then takes it back down to the water so it can return to its family and perhaps tell its own drone story.

Okay, this is the craziest thing that’s ever happened, actually.
This is the biggest fish of my life.
I don’t know what to do with the rest of my life.

So, David had quite the day at the lake. He tried an experiment that could have easily failed – he could’ve had no bites, the drone could’ve been too week to pull the fish in, or the drone could’ve flipped over and sunk into the drink. Instead, he had an experience he’ll never forget and was able to share it with the world on YouTube. His family will probably never forget the day their husband and father came running up the hill screaming and holding a “huge” fish!

Notable comments on the video:

About the DJI Phantom 2 Vision+: